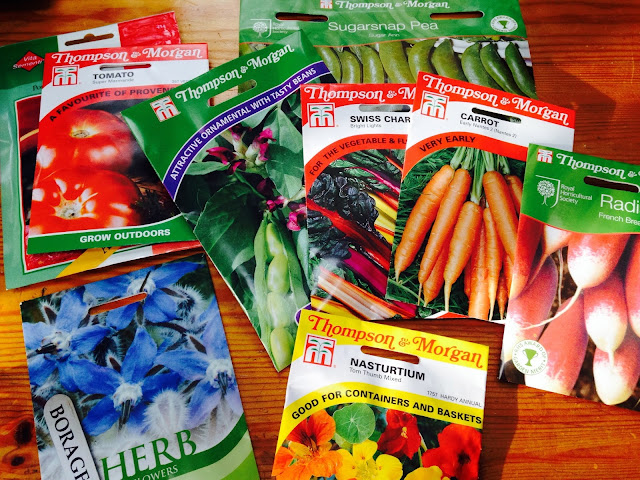 I got back from the Farmer's market this morning with a heavy basket, part of my major new years drive to buy local, seasonal produce.

The postman had been and the veg seeds I ordered at the beginning of the week lay on the floor in the hall.  Bea had decided to attack them as they came through the letterbox; part of her major new drive to seek and destroy all who threaten our home, real and imagined.

Fortunately the seeds were well enough packaged to have survived.  Thank you Thompson & Morgan, not just for your conscientious packaging, but also for the hours of fun day-dreaming as I peruse your website for inspiration these cold winter months.  The promise of the new year is all here contained in these little paper packages. 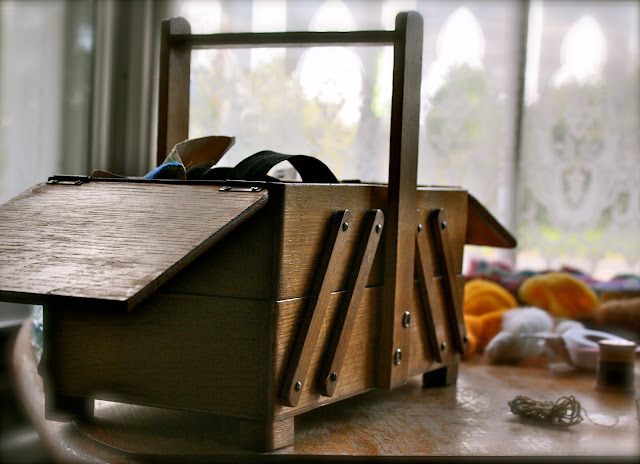 The beginning of  a new year, full of potential. 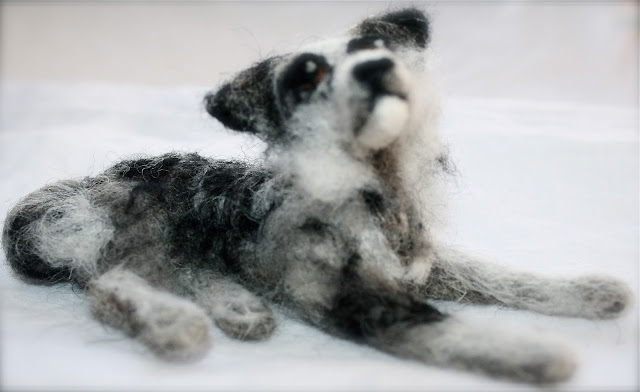 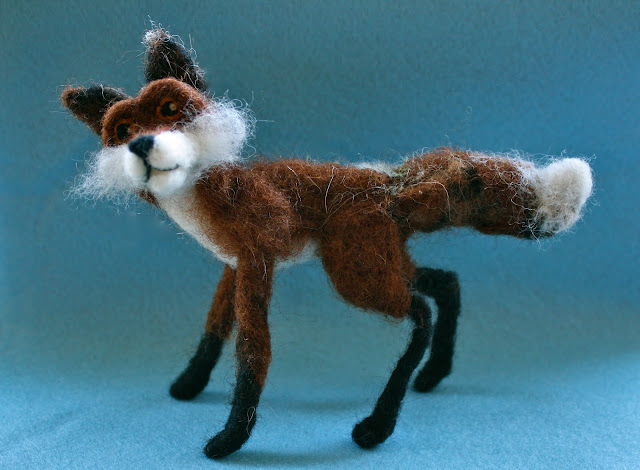 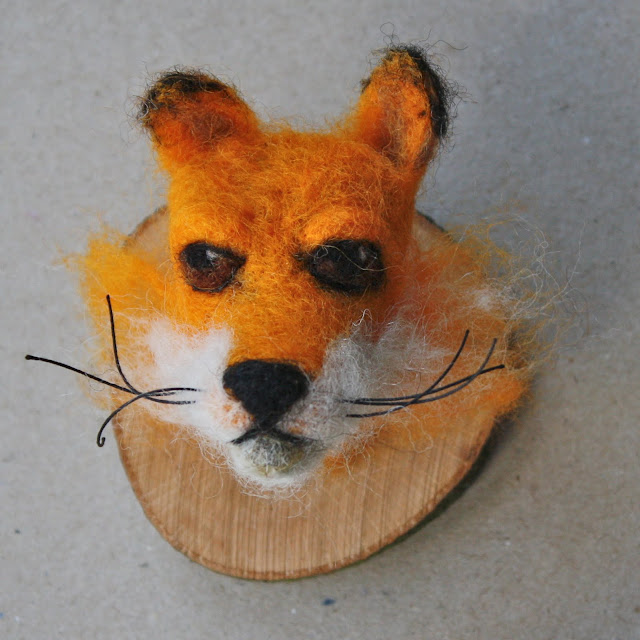 Email ThisBlogThis!Share to TwitterShare to FacebookShare to Pinterest
Labels: felt animals, work to do 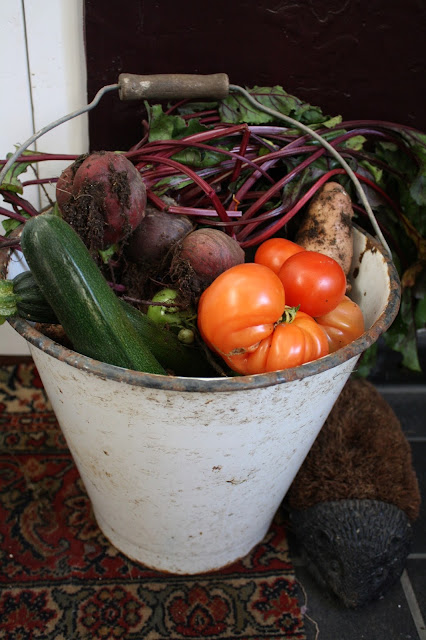 It's been so mild that last weekend we cleared the veg patch and planted more onions and garlic to over winter.  In clearing, I realised that considering we had decided to buy no new veg seeds for the garden, we did quite well this year.


So, I am very excited for next year, when we are officially getting stuck in on the garden.  I've already planted native bluebells and wild garlic along the fence by the river for the bees.   I've not included the bees in the list of this year's bounty - but then we didn't get any honey this year.  The chickens, have been great though, 4 eggs a day and I'd like to increase their number and add ducks and grouse or quail to our menagerie.

Much of the fruit we planted this year was left to get established so, there is some pruning to do before next year when I'm hoping we might get more of a harvest.  The tomatoes did well in the greenhouse, but not so well in the veg plot itself.  So, our old greenhouse from the allotment needs to go up for them next year.  With two greenhouses I'll be able to germinate and raise young plants whilst also allowing tomatoes, chillies and aubergines to thrive under glass.

And we also had a fabulous crop of potatoes this year.  We broke our rule and bought seed potatoes as they were to help us to turn the soil on the new plot.  They were quite neglected, so I am impressed with how well we've done, 4 sack loads. 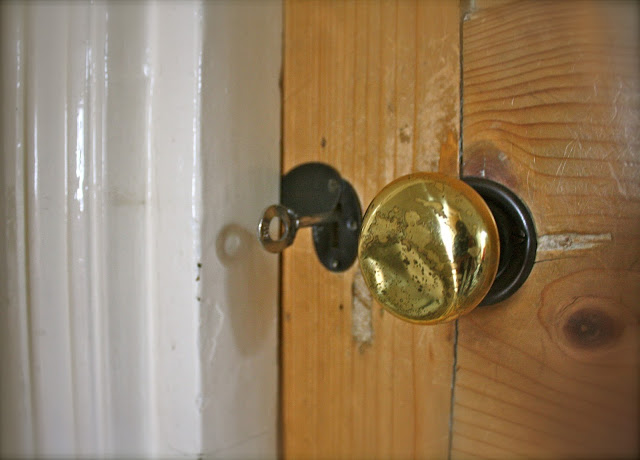 In Ash cottage there is only one door that usually remains closed.  It is my workroom, Mrs Fox's Workshop.  Not only is it shut, but it has a key in the lock.

Before moving I wrote a post called A Room of Ones Own: The Studio. I looked forward to how my new work space would be integrated into my home rather than a shed in the garden.  As it is, my work space has become a junk room and the door remains closed.  It's a mess in there, and I just don't want to look at it.

This last month I've had a bit of a creative break through and I'm starting to work again.  The door is slowly opening, but, the key is still there in the door. 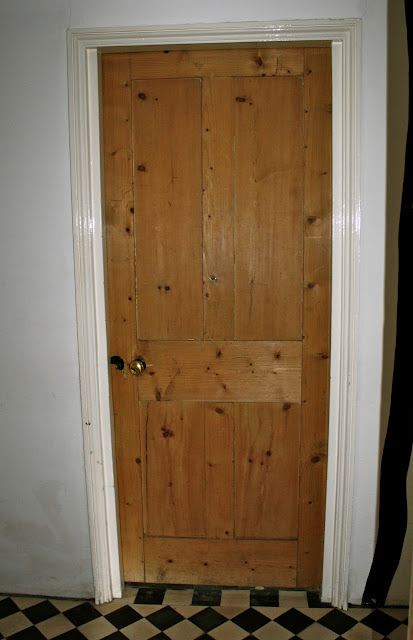 Email ThisBlogThis!Share to TwitterShare to FacebookShare to Pinterest
Labels: SAHM, work to do, workspaces

In any new home your garden starts as something of a mystery.  I always think it is best to leave a garden for the first year and see how it works, where the sun goes, what grows well, what secrets it has to reveal. We moved on 26th September 2015 and celebrated our first year in Little Hadham with a bottle of organic cider at the village music festival.

One rather lovely surprise from the Ash Cottage garden has been the greengage trees.  There are 6 of them.  A little over kill I thought, never having tasted a greengage in my life.  However, over the last month they have gradually unburdened themselves of their fruit.  Little green goblets of sharp, golden, green nectar in firm skins of bright green.  They are delicious. 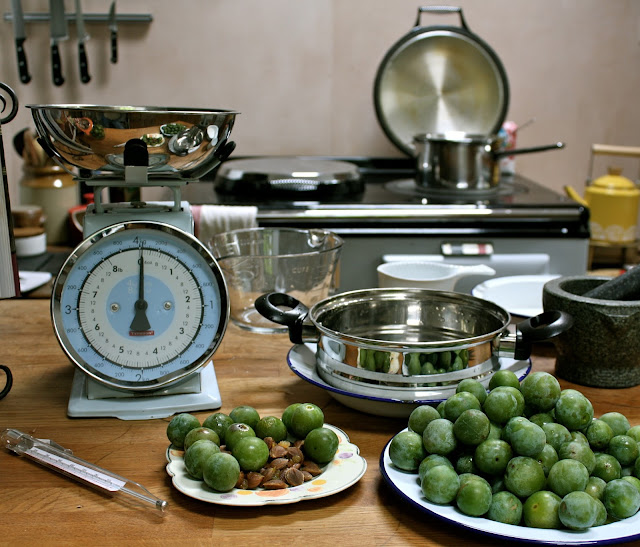 
They are a revelation that I can’t recommend enough.  Despite gorging ourselves on them, freezing them, preserving them in jam and chutneys and giving them away to friends and family, teachers and mums at the school gate, we still have more... 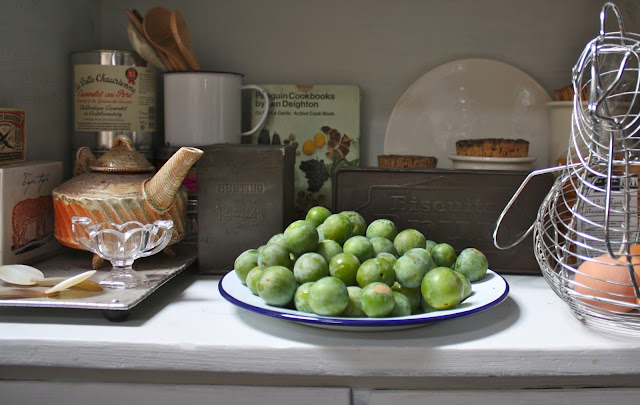 Next year I will save up the soft fruit punnets from the grocers, and the little foxes can earn pocket money picking them and batching them up into saleable quantities to dispose of at the garden gate. 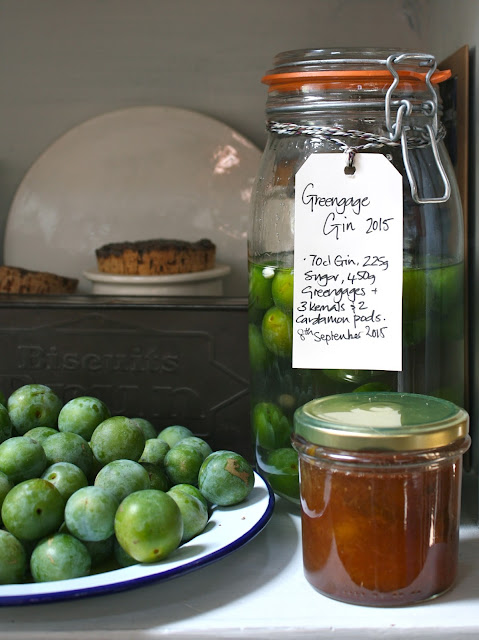 And How are the Bees Doing? 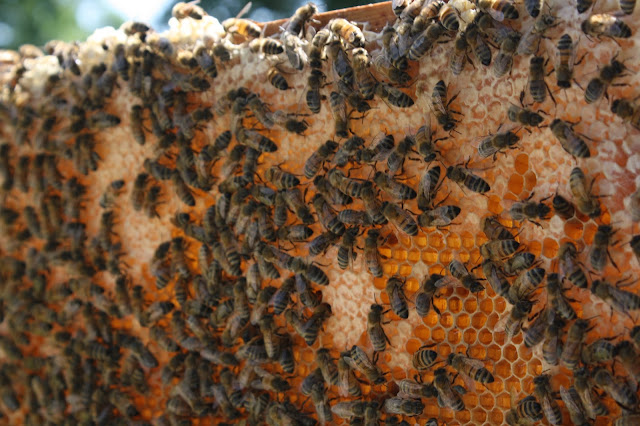 Well, there is a long answer and a short answer to that question:

Short is: I still have a colony of bees that I am readying for winter.  No, honey for us this year, but lots of other bee keepers say that is no surprise in the first year.  The long answer is below, here are some pictures of me with my little bee-keeper assistants to ready you for it.

So, long story is:  I got more relaxed with inspections and things seemed to be chugging along ok. The colony built up in size and so I added my supers to the brood box and waited for the bees to do something.  They didn't take much interest, so after speaking with my 'bee guru' (Malcolm) I added some frames of drawn comb because, apparently, bees can sometimes be a bit uninterested in the hard work of making the wax honeycomb to store the honey in.  Lazy bees!

By the time I had collected the drawn comb from Malcolm my bees had made a start on drawing the frames of foundation that I had given them in the super. Clever bees!

They were soon busily storing honey in the new super.  And I thought I was well on my way to a successful first year of honey production.  I checked them weekly through June and July, tore down any queen cells I found to prevent them swarming.  We had a couple of episodes of bearding. Bearding is when the bees all come out and hang around on the side of the hive, making you panic and think they are going to swarm.  But they didn't.

I was a very happy, excited, quietly confident beginner bee-keeper, when I went down to the hive one sunny morning and I immediately knew there was something wrong.  There were very few bees outside the hive despite it being past 11 on a sunny morning.  I couldn't check them until later that day when I discovered there were very few bees inside the hive either.  After a bit of panic and calling a few experienced bee keepers for advice I had to accept my lovely gentle queen had left me.

A fellow bee keeper popped over with a frame of brood (baby bees) in case I needed to rear a new queen.  How nice is that?  Friday evening, just pop over to some woman I don't know's house, give a stuttering wreck of a bee keeper a frame of precious brood in case she needs to re-queen a colony of bees! 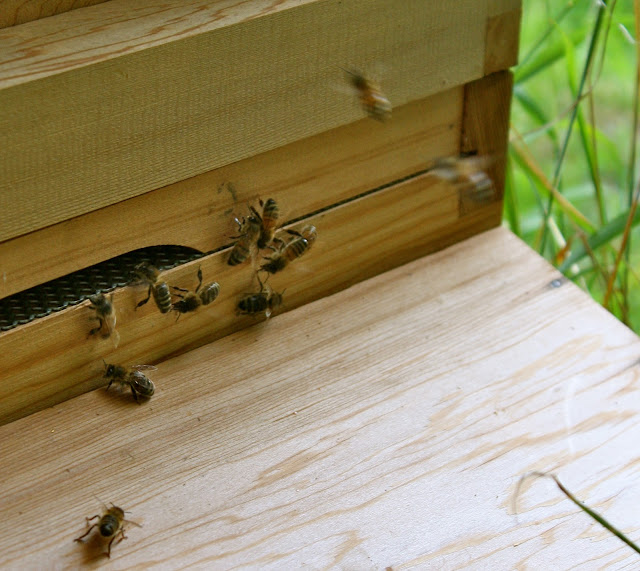 Fortunately there was a new young queen in the hive.  I didn't find her straight away, but once I had seen her, I then had to leave the hive undisturbed for a few weeks to give her the chance to fly off, mate and (hopefully) return to the hive ready to spend the rest of her life laying eggs.  This has all seemed to happen in order.

But my new queen is not so chilled and calm as my old queen and the mood of my colony is very different.  They are quicker to become agitated when you inspect them, louder, the guard bees quicker to try and see you off and a lot more persistent in their job.  The difference in the nature of my two colonies is huge and I miss my old queen.

Since then my new young colony have eaten all the honey stores that were in the super, hence no honey for me.  They've also had to fight off marauding wasps that tried to eat their honey stores.  This they have done admirably, but then considering their temperament I'm not surprised.

I'm undaunted.  I'm getting this lovely lot ready for winter and planning to get a new colony next year and maybe try re-queening.  I've already got my name down for another bee keeping course, Bee Improvement for All, this in the hope of better swarm management and a gentler colony.  The next big challenge is getting this colony through the winter.  I'm treating them for varroa to get them as healthy as possible and starting to feed them so they can make enough honey to store through the lean winter months.  Wish me luck

Our Hen's are laying 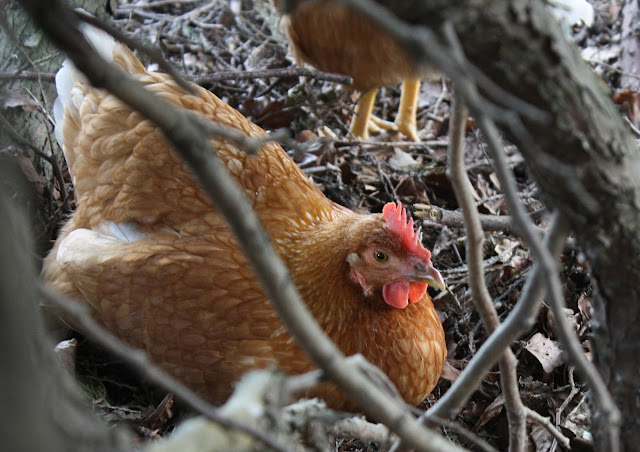 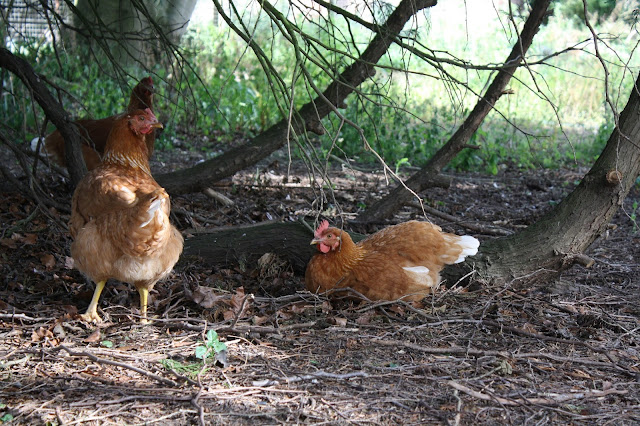 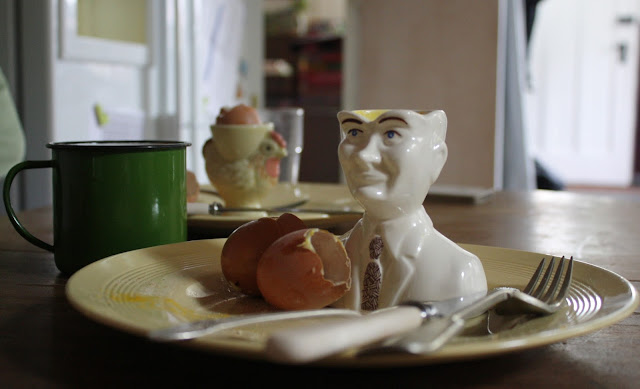 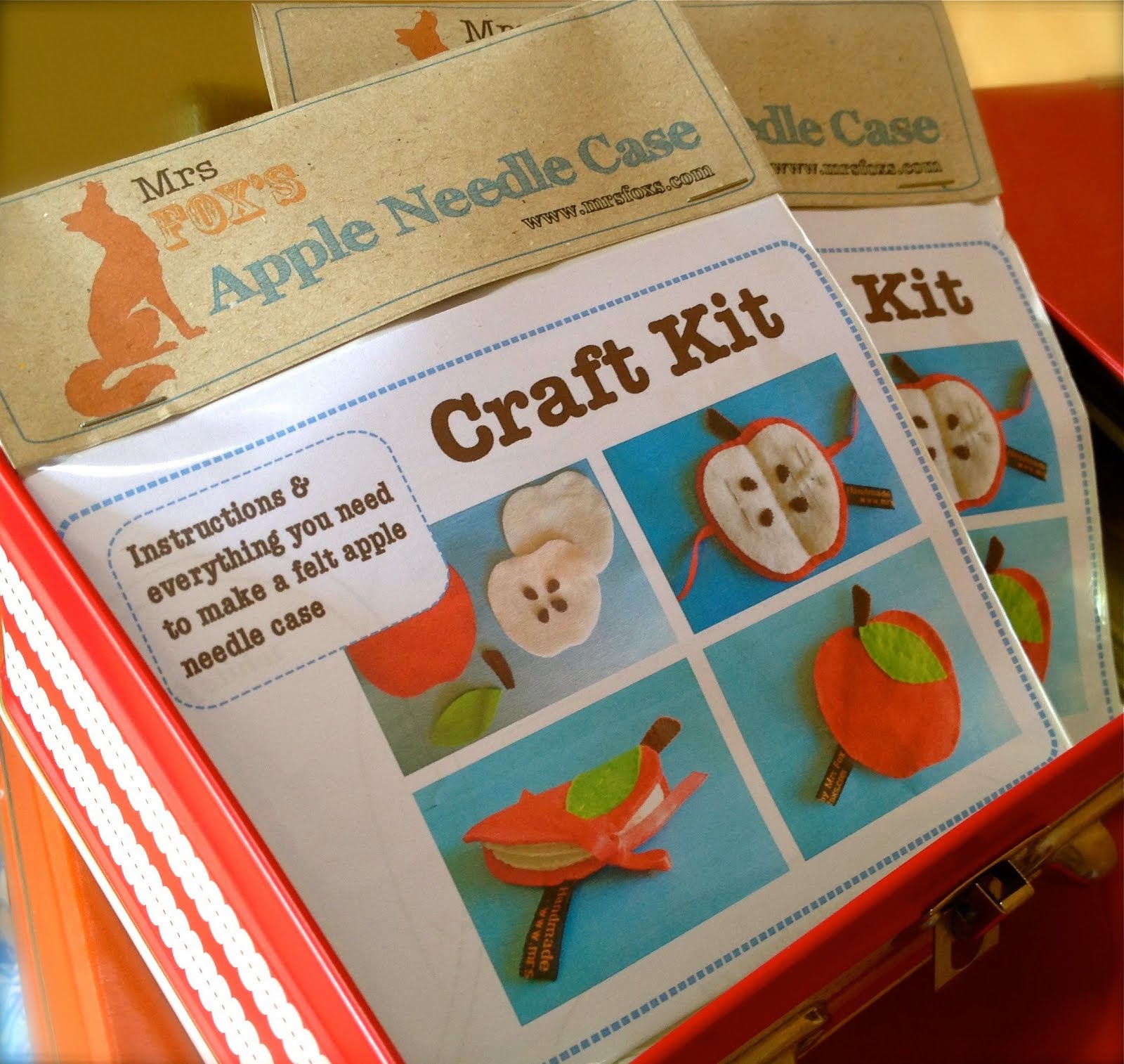